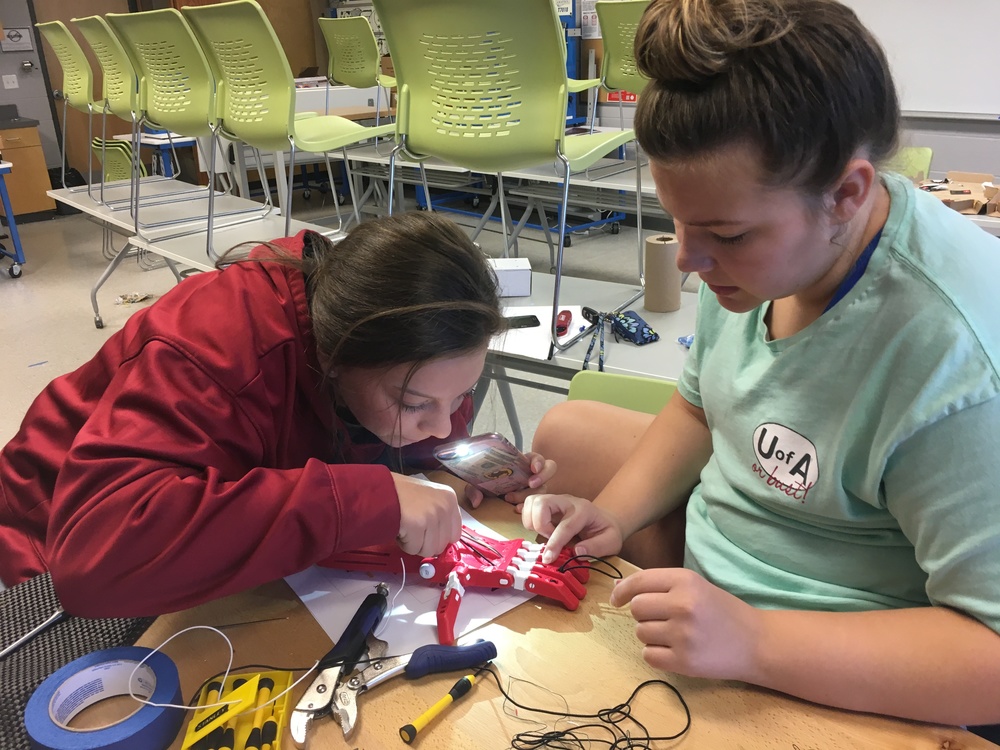 Paris High School students Anna Claire Richey and Joni Inman have created their own charity and are hoping to change lives with it.

The charity, called Give Me Five, will use a 3D printer at the school district’s career center to print parts for prosthetic arms, hands and fingers, thanks to their partnership with a software company. The girls will then assemble and give away the prosthetic.

The girls recently made parts for and assembled their first prototype hand for inspection and approval by the software company. The prosthetic hand, which is fully articulate, meaning the fingers can move and grasp objects, took 28 hours to print and seven hours to assemble.

Once the hand is approved, the girls will begin to make more products to provide free of charge to patients in the U.S. and 45 other countries, who cannot afford a traditional prosthesis. These products will be fully functional and, the girls said recently, will change the lives of patients tremendously.

Each hand will cost Give Me Five $75 to make. A typical, medical prosthetic hand costs around $11,000.

“When dad went to the event, he heard about the project and talked to someone,” Anna Claire said. “When Joni and I heard about it, we got really excited.”

According to Dr. Richey, “this was the top service project in the nation. Only 49 people have been approved to do this. The Sprindale School District tried to do something like this and couldn’t. It’s pretty intense, printing and assembling.”

Once the girls heard about the project, they approached Marcus Smith of Arkansas Tech University’s Ozark Campus, the robotics teacher at the Paris School District’s Career Education Center, and he allowed them to use his 3D printer. Dr. Richey said once the project gets going, the girls will look into getting their own 3D printer.

Anna Claire and Joni are in the process of creating a Vision Statement for their charity, as well as a Mission Statement. They have also put together an Advisory Board, including, Dr. Richey, Marcus Smith, Teresa Inman, Tracy Richey and Emily Richey.

The girls said Smith has been instrumental in getting this project started and continuing it.

The eventual goal, Dr. Richey said, is to produce 10 to 15 prosthetics each year.

“We hope that by doing this, we can enable people to reach their full potential,” Anna Claire said.

The girls are building a website for Give Me Five and beginning to raise funds and look into available grants to help fund their charity. If someone has a need for a prosthetic finger, hand, or arm, they can contact the charity at richeyenable@gmail.com

Anyone interested in making donations to Give Me Five may contact Anna Claire Richey or Joni Inman at richeyenable@gmail.com